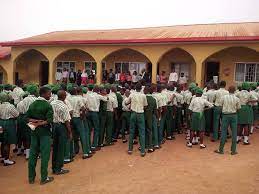 The school was established on 23rd September, 2002 and started with 36 students comprising of 24 boys and 12 girls.

The pioneer principal was Dr. Mrs. O.A. Orenuga, a senior lecturer in the education department of the college, seconded to the school. Approval for upgrading to a senior secondary school status was given in 2004 by Ogun State ministry of education, science and technology. Since the school took off with both JSS 1 and 2 classes, it was able to present its first set of 12 finalists for the West African Senior School Certificate Examination (WASSCE) in May/June 2007. They all came out with good result.

The school moved the senior classes (SS1 – 3) to its permanent site on November 1, 2007 due to the enormous work done by the management board of the school in the area of infrastructural development. A new full time principal, in the person of Mr. Adebiyi Oduyale, was employed and he took over the running of the school also from November 2007. The National Examinations Council (NECO) inspected the school facilities, found them up to date and eventually approved the school’s application for participation in its senior school certificate examination in February 2008. This enabled the school to present its finalists in that year for the NECO SSCE alongside WASSCE. The school also successfully staged its maiden inter-house sports competition in February 2008.

Another civilian bus was added to the existing one to facilitate easy and smooth transportation of students. A new customized uniform with black shoe and cardigan to match was also introduced. The school’s population increased tremendously while the staff strength was enhanced from time to time. Learning was facilitated through regular provision of facilities like furniture, adequate stocking of the library with relevance books, furnishing of computer room and procurement of new computers, purchase of photocopying machine, science and sports equipment. The permanent site of the school was electrified while an additional block of classroom has just been completed.

The school won a lot of academic and sporting laurels. A female student (Mary Awojulu) participated in the national Mathematics Olympiad competition and got to the South West regional final in Akure, Ondo State. The school participated in Children’s day essay competition both at the local and state government levels and came first and third respectively. Beside these, many of its students participated in many invitational debates and quiz competitions and came out in flying colours.

In the area of sports the school’s football team engaged its counterpart from UNAAB International school (UNIS) in friendly matches recently and won convincingly. The team also participated in the maiden edition of the private secondary schools football competition and reached the quarter final stage. Tayo Ramoni, a female table tennis wiz-kid won the bronze and silver medals in the single and double events of the South West under – 18 table tennis competition in 2008. She capped it with a second position placing (silver medal) in the table tennis event at the 17th national sports festival in Kaduna, tagged KADA 2009. In athletics the school’s male and female relay teams took part in invitational relay events in many inter-house sport competitions and came out victorious.